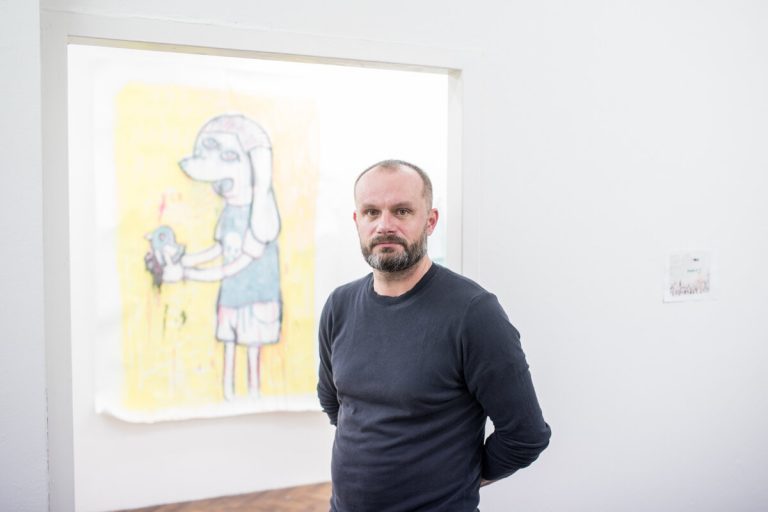 Erik Šille (b. 1978) is one of Slovakia’s most prominent middle-generation painters. In 2006, he graduated from prof. Ivan Csudai’s studio at the Department of Painting at the Academy of Fine Arts and Design in Bratislava, where he has been teaching since 2017. His works focus on painting and drawing, using cartoons, advertising, and diverse forms of subculture as a basis, taking notice of public, political and ecological issues. His paintings are an eclectic combination of references to diverse contents and contexts, ultimately conveying a strong existential message.

Since 2004, his works have regularly been exhibited both in Slovakia and abroad. In recent years he has had several individual exhibitions in Japan (Youkobo Art Space Tokio), along with exhibitions in the Czech Republic and Austria. He has worked regularly mainly with the Krokus Gallery in Bratislava. His extensive solo exhibition “error“ in Kunsthalle Bratislava also saw preparation of a monograph of his works. Šille has participated in a number of national and foreign group exhibitions. The intensity of his exhibitions is striking, reflecting his solid position in theCentral European landscape of visual arts.

Šille has won various awards. In 2009, he won 1st place in the Painting award of the VUB Foundation, and in 2019 he received the Tatrabanka Foundation Award. His works are exhibited in established public and private collections, including the Slovak National Gallery, Nitra Gallery, Bratislava City Gallery and others.